Miles in The Drawer Boy

Rahul is a bilingual actor, director, creator, and producer born, raised, and located in Montreal. Though his heart lies on stage, he wears a variety of hats in and around theatre, film, television, and arts administration.

He holds a Bachelor of Fine Arts (with honors), and a Graduates Diploma in Communication studies, both from Concordia University. Notable film and TV credits include: The Bold Type, Best Sellers. Notable theatre credits include: Romeo in HPC’s Romeo and Juliet, and alumni of the Black Theatre Workshop AMP ensemble.

His company, Tantalus, where he is co-artistic director has produced four productions, and is now working on the currently postponed What Rough Beast by Alice Abracen presented as part The Brave New Looks series at Centaur Theatre.

Rahul got his first taste of PEI earlier this year through Kitbag Theatre’s Lungs, and he’s very much excited to get back on stage at the Watermark Theatre for The Drawer Boy. 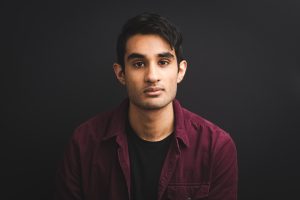