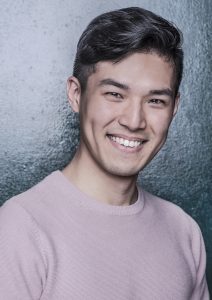 Giles Ralston in The Mousetrap, Various Roles in The Trip to Bountiful

Jonathan is thrilled to be spending his summer here on the Island—it’s his first time here! Prior to joining the Watermark family, he made his professional theatre debut as “Mike Chang” in The New Canadian Curling Club (Alberta Theatre Projects) last year, reprising the role in Theatre Orangeville’s production earlier this year. In the realm of film and television, he is most known for his role as “Brother Zachariah” on Shadowhunters (Freeform), but has also appeared on Suits (USA), The Romanoffs (Amazon), and Murdoch Mysteries (CBC).

Outside of acting, Jonathan enjoys singing the praises of Avatar: The Last Airbender to anyone who will listen. Shoutout to all his friends and family for their love and support (you know who you are), and very special thanks to Sandie, Raymond, and Yanick at Newton Landry for their hard work over the years—this boy is living his dream because of all of you!